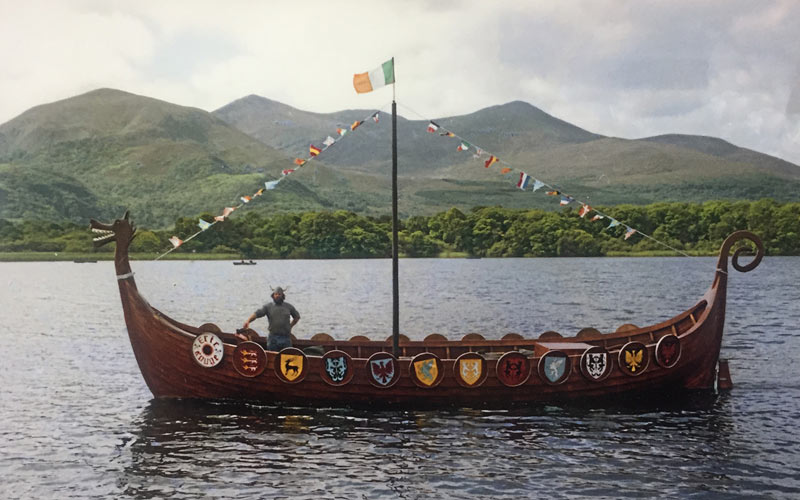 I had a fantasy always to have my own Viking ship. In 1984, I did recherché on my pet project. I had to get the plans permission and the plans from both Norway and Sweden and I acquired the plan for the famous war ship Eric the red or Eric La Rouge, I had to use both names as part of our agreement.

Eric was an explorer born in Norway (951 to 1000)who founded the first continuous settlement in Greenland and was later exiled in Iceland. I got the best boat builder I could find and Dan Gleason from Castlecove and his wife, and sons James and Dan did a great job. They started the construction in early 1985 and they finished it in just under two and a half years. We used Elam because it has no straight grain and would not crack, oak, Larch and Cedar, all woods I knew would never rot.

The Ship was 42 feet long and 12 feet wide. Viking Ships had one fault, they rolled in the water when they met a wave. I did an experiment with a barrel and planks of timber on Lough Leane and I eventually worked out the balance to stop the barrel Rolling. Now the problem was to adopt my plan to the Ship.

In consultation with boatbuilder Dan Gleason, we made the chest in front of the ship wider and the keel below the water was expanded outwards To stop the rolling. With these changes in place, we found that inside, the Ship was too weak to support these changes. I had to redesign the forms to make it stronger. I got my idea from old roofs where the batons coming down were joined by cross Batons. We also increased the thickness of the timbers. Now when the Ship hit the waves, the forms locked against each other to stop the ship rolling. We used timber Douls and original nails.

We put a Carved Dragon head in front and a Dragon tail at the back. We had a carved steering wheel at the front and a tiller to steer from the back. We put in a 30 hp engine in the middle of the Ship which we buried completely in a well and the Ship had the box seats that was a regular feature of the Viking Ships.

The Mast was in the centre of the Ship. I got local painters and artists to design 15 shields on each side of the Ship. This was a common feature in Viking Ships because it proclaimed the successful conquests of the ship Eric the Red or Eric la Rouge. When finished the Ship could take 60 people but I decided for safety, I would take only 30.

The big day finally arrived, the huge timber shed that the Ship was built in was taken down completely and it was with great enjoyment to everyone involved, when it was finally loaded by a crane onto a boat trailer. We had a Garda escort to the golf club in Killarney where the crane placed the ship near Lough Leane pier.
This was in June 1988. I had spent everything I had on the Ship but boy was I happy. I had a full license from the O.P.W. to operate my Ship on the lake so I was set to go.

Seamus Guiney, one of the best trawlers on the Killarney lakes was my captain, (who was there voluntarily) and we had two musicians, an accordion and violin playing Irish traditional music on board. We were all dressed up as Vikings and we sailed straight to Ross castle. I jumped off the ship and I stood on the island and hit the ground with my staff and kissed the ground and shouted “I declared myself as a knight of Inisfallen Island (I was one of five people knighted by Maurice Mulcahy previously on the Island) and as a Viking warrior”. Eric the Red, I claim my place in Ireland to take people out on the Killarney Lakes. “If there is anyone with an objection let him speak now or be silent forever”, a large number of people were watching and there was complete silence. I have never been challenged about my statement to this day. The kiss on the ground was to seal what I said.

I based my Ship on Reen pier and I did hourly tours. We had full insurance, life jackets, 15 fire extinguishers and and a public address system to help the passengers on and off the ship. We sailed to Innisfallen Island and to O Sullivan’s cascade ,to Tomies Mountain, Glenna bay and Brickeen Bridge where the lower lake meets the middle lake. On one occasion when the boat, the Lilly of Killarney hit the rocks and damaged her under carrage and was out of action for three weeks, I took over her services and when she was ready to resume, I went back to Reen pier.

I offered the ship as a rescue boat on the lake to help boats in difficulty and I was going to have someone available at all times so that it could be available 24/7 but my offer was never taken up. I had two oars made because the boat could be rowed by two men if anything happened to the engine. I got a letter after a few years claiming that my Viking ship was not in trend with the Fauna and wildlife of the lake. I was very surprised to be told that because everyday I used to give bread or buns that I had spared to the Swans. One night I took the Ship out into the lake and I spread two bags of oats on board. Next morning I went out to the Ship with a local photographer Don Mac Monagle and he took pictures of the Ship. It was full of Swans, Mallard ducks, Wideon Ducks, Pochard Ducks, Cormerants, Pigeons, and hundreds of smaller birds too numerous to mention.

When Don published his photos, the headline in the local newspaper read “Even the Swans and Ducks came to help O’Brien”. One Swan was dead having got tangled in a fishing line in a near my boat. This broke my heart because I knew he was one of the Swans I was giving bread to daily. I cleaned the deck and took the dead Swan to Library point, a remote place on the lake where I laid him to rest. Now you may not know, that a Swan has only one partner in life so his mate was completely lost. She came to the Ship each day and came on board to be fed and didn’t want to leave. She often slept on the deck and after a few months, one morning I found her dead. I believe she died of a broken heart and I took her out to Library point where I laid her to rest beside her mate. I was heartbroken by these two Swans who had become my friends and pets. I even gave them names.

The newspaper headlines said, “Dead Swan May well have saved O Brien’s neck”. I was now in debt and making no money ,therefore I sold half a share to a good friend who had a guest house on the ring of Kerry road He parked the Ship in front of the guest house,and it was their for years until he decided to sell and go back to England. I couldn’t afford to buy back my share so he sold Eric the Red ,Eric la Rouge to a museum in Wexford where it still resides. I still owe half of it but at least it is still giving enjoyment to its visitors all year round. 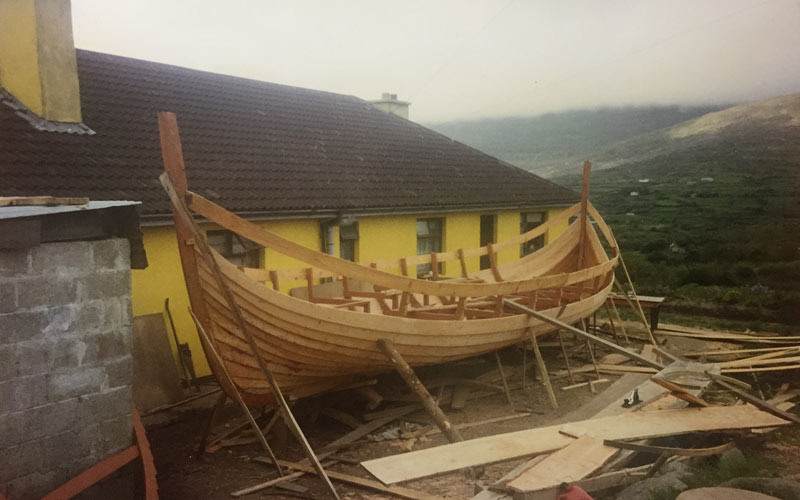 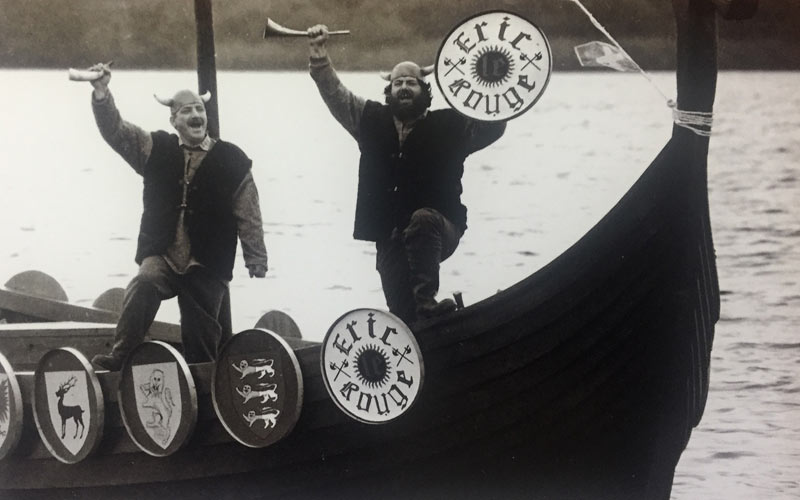